But perhaps more similar to what my blog was before I started sewing.

As you will know if you read any post from late last year, I was pregnant. I am no longer pregnant. Rather, I have a baby. Quite a hefty thing, she is now draped over one shoulder while I half recline on the sofa. I type this post mostly one handed. One side of my singlet is covered in regurgitated breast milk (euphemistically called posset), which my sweet darling deposited while screaming from tiredness but fighting all my attempts to encourage her to sleep.

I’m not sure what worked. I walked up and down the hallway, patting her on the back, alternating between making hushing noises and singing nonsensical lullabies (of course she’ll wake when the song ends with the baby falling out of a cradle which has been irresponsibly hung in a tree! How is that a song to sleep to?) She wailed and wailed.  I had already fed her and changed her. I was on the brink of changing her again when she simply dropped off to sleep mid wail. To check, I walked into the bathroom and looked in the mirror. Out cold. I half sat down on the sofa, and I have remained in this position for an hour, as each time I go to move, she wails again. A pained wail that I have only heard a few times; the first time when she was given a jab by the midwives in hospital.

Yesterday, she would not sleep at all at this time, so I intend to remain immobilised by her until at least 2 hours have elapsed.  It is as good a time as any to attempt to update my blog.

Sewing baby clothes is impossibly distracting, especially if your hormones are playing havoc with your emotions generally (I.E. You’re preggers.) Every time I finish something (which given how tiny the seams are and that I’m sewing knits on my overlocker is less than half an hour, I just giggle, and if partner happens to be home, I bring the garment around expecting him to giggle too.  He obliges.)

I borrowed a heap of Ottobre Kids pattern magazines from Helen of Funkbunny, and stuck post it notes all over them. I’m a lawyer and we love post it notes.  I think the legal profession keep post it note makers in business. But I digress. Back to baby stuff:

There was one magazine in particular that had a heap of patterns which took my fancy and which could outfit my baby, due to arrive in Melbourne summer: Summer 2013. Each pattern has a number and name to identify it. I traced off the first four patterns: (1) Speedy Girl Jersey Dress; (2) Star Star Romper; (3) Little Whale Onesie; and (4) Summer Sea Jersey Pants

Ottobre 03-2013 All Designs Page. Kinda my favourite part of the magazine!

I have no idea what size she’ll be, or actually, what size is what as Ottobre helpfully suggests that you measure the kid you’ll be sewing for before starting.  I set off for a growth scan, but didn’t get the measurements I needed (perhaps because I did not ask the sonographer to do so …)

However, the Internet is terribly helpful.  Toni Coward of Make it Perfect has provided an age/size guide chart.

This is not foolproof, of course, she could be born a giantess or tiny.  I don’t know. But it’s enough to be getting on with, and I figure, (a) using knits of different characteristics will lead to different results and (b) she’ll fit stuff at some stage (we just have to make sure we catch the right stage).

My nesting instinct (I assume) has manifested itself in a desire to organise our house (which is, admittedly, pretty organised). I did a quick and dirty wardrobe cull of things I knew I would not wear in the next six months, and was unlikely to wear in future.  Many of them were tops that had been retired from being worn to work, or were tshirts that did not quite fit anymore. I also had a number of fail tees and knit tops that I’d made. From these, I harvested fabric and discovered that most patterns in the baby size range fit nicely out of one of my tshirts, and one of my partners could provide one and a half outfits!

The only pattern that would not fit where the Summer Sea Jersey Pants, partially because the trouser part is just one piece of fabric with only a centre back seam  I’m sure it can be pieced, if I wanted to!

There’s nothing really to say about making these up except for the pleasure, speed and ease. Ottobre’s instructions are perfectly clear, although I did not follow them completely, being au fait with knit sewing and discarding techniques I’m not enamoured of (like knit binding rather than knit bands, which I weirdly prefer to sew in the round rather than flat, and using clear elastic to gather).

I am good and do read through all the instructions before starting, so I know what I can ignore.  I’ve decided sewing instructions are like recipes.  If you’re familiar with the process, make it your way (unless the instructions provided you with some awesome revelation. I have just recently discovered a fool proof way to boil eggs, which has consistently worked four times as hard boiled eggs for me, and once as perfectly soft boiled for him). If you’re not familiar with the process, follow carefully, but then make it your own in future.

FYI, I’m a pretty unsuccessful baker because of my receipe following callousness, but I’m otherwise quite a competent cook.

Here are the results of my first foray into baby sewing: 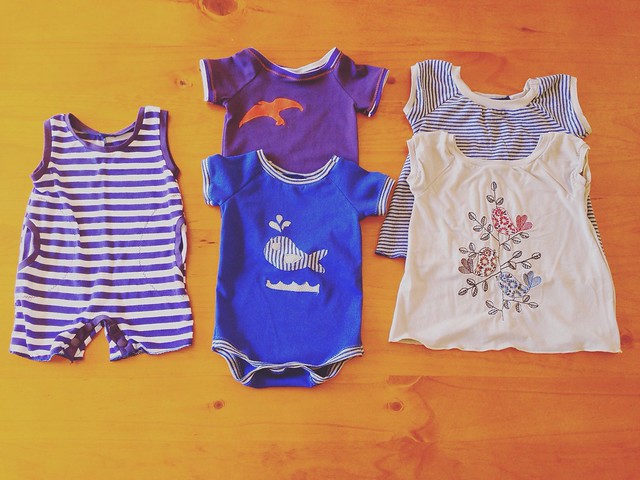 I made the bird appliqué myself; the whale is from Ottobre.

On a different day, I made myself another pair of Hudson Pants, from blue polka dotted fleece, which I had intended as winter trackydacks. I had enough fabric left I’ve for a matching pair for Her.  Then I laughed and laughed and laughed.

If only I'd bought another couple of metres of this fabric. We could be an entirely matchy-matchy family, & I would spend my whole life incapacitated by the giggles. (Mine are yoga waistband #hudsonpants; hers are Ottobre 03/2013 – Summer Sea Pants).

Yes, ALL of them.

Although if you want to be comfortable, maybe just ones made out of stretch fabric.

As flagged and promised in my earlier Expandable Belly Sewing post, I also made two pairs of Clover trousers, with some maternity modifications.

These are the maternity changes I made:

In short, as I had previously decided Clovers were just well fancy leggings, I simply treated them as wider-legged leggings.

I made a black pair and a dark brown pair from ponte I obtained from Darn Cheap Fabrics. Each fabric was quite different from the other, having different amounts of stretch (the black had less stretch), appearance (aside from the colour, the brown was more matte) and behaviour (the brown was much easier to work with).

For the yoga waistband, I simply cut a rectangle of fabric that was my pre-pregnancy waist measurement less a few inches (2 for the black, and 4 for the brown, based on my assessment of their stretchy-ness) by ten inches high, and then sewed the short ends together, folded the now cylindrical tube along its length and attached to the top of the sewn together trouser legs.

These saw me through the second trimester quite nicely, and now I’m in the third trimester, I can still quite comfortably wear the brown pair but only wear the black pair if I know that I only have to be in them for half a day.  They are a smidge too tight now, being a fabric with less stretch.  I suspect I’ll be able to wear both trousers post pregnancy, too, they’ll just look a little bit like trackydacks. 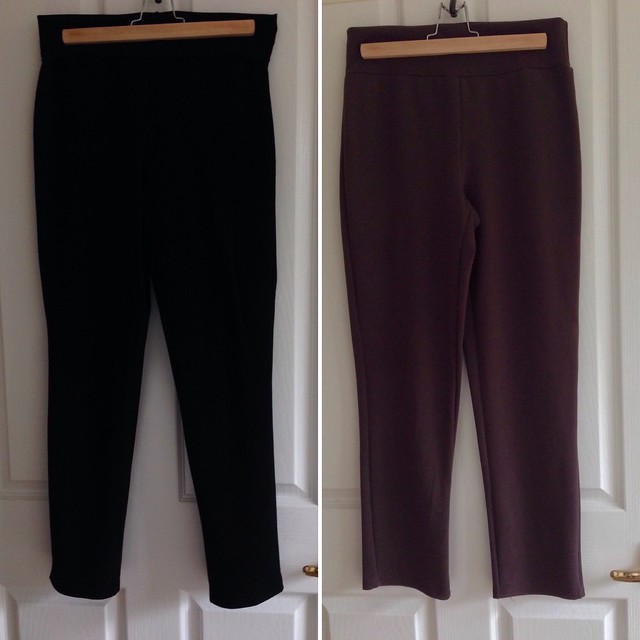 Black is hard to photograph. Brown not much better.  You can see the difference different fabric makes, though, in the leg width.

However, as we are getting into summer, both are much too warm. I resolved to make some more legging-type trousers to wear for summer, and that I can hopefully wear post-crazy big belly. I had some grey knit fabric that is loosely woven. I had it in ridiculous metreage (perhaps 4?), which tells me I bought it from the Clear It outlet.  Also, there was a huge hole in the middle, so I had to cut around that.

I cut out a pair of Hudson pants (pattern by True Bias), again with a yoga waistband.  I had enough fabric left for a pair of leggings too but knew that if I simply cut boring leggings, I would end up with a weird amount of fabric which I might add to my scrap collection.  Enter the Steeplechase leggings pattern by Fehr Trade, with its well weird pattern piece that turns into a thoroughly awesome pair of leggings.  Again I cut a yoga waistband.

I don’t think I’ve told you, but I’d previously made 3 pairs of Hudsons: light grey cotton knit; green fleece and stretch denim-look knit.  I love the pattern – goes together really quickly, are definitely trackydacks but don’t look too sloppy. I will next have to try it in rayon, maybe. 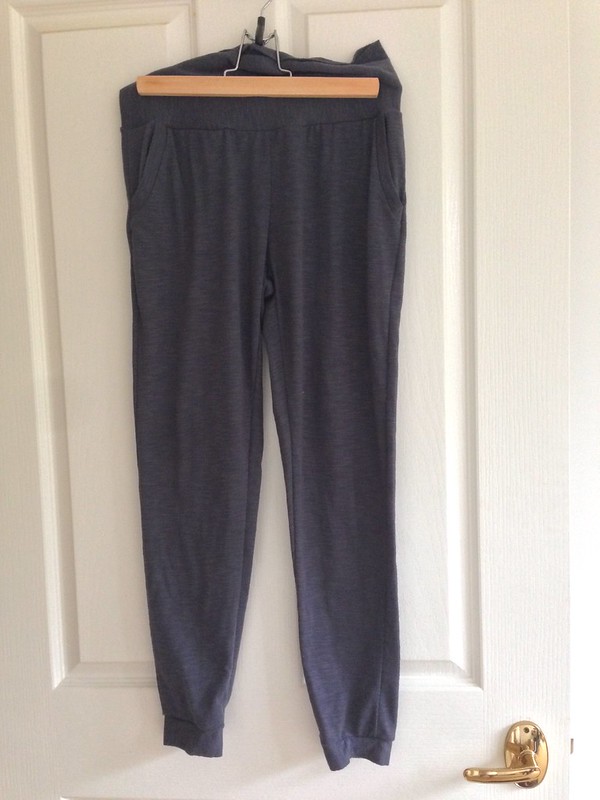 I also haven’t told you I’d made Steeplechase leggings. Two pairs thereof. One out of stretch velvet, which was my wearable muslin and practise garment.  I chose the stretch velvet as it had exactly the same stretch properties as Supplex that I had obtained from Stretchtex for the express purpose of making activewear. I then proceeded to make a 3/4 length pair of Steeplechase leggings, with reflective piping in the curved seams.  They are quite awesome, but i haven’t been on my bike since the end of the first trimester (sad face). 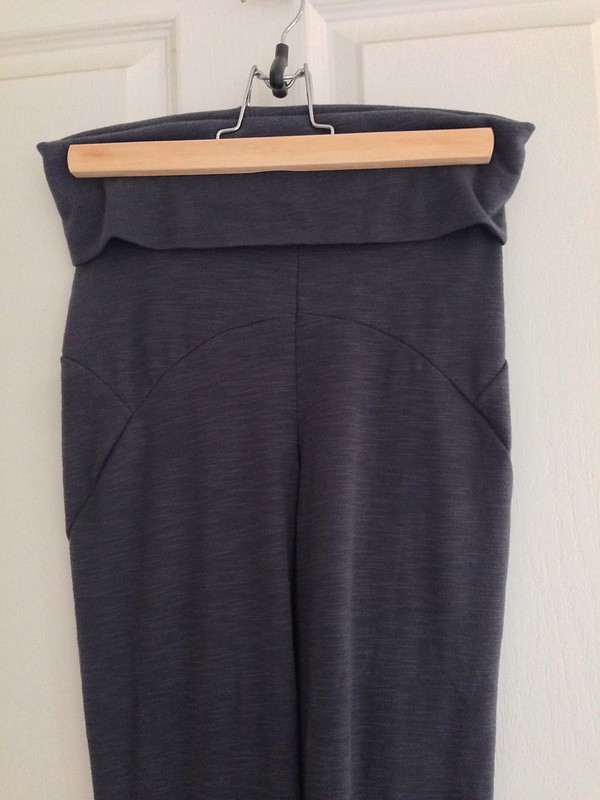 Finally, as I would be threading my ovelocker with grey, I found some grey ponte in my stash. I cannot recall where I bought it from, but suspect it was Rathdowne Remnants, and I may have hoped to make a Morris Blazer from it, until I decided it had too much stretch to work. From this, I cut a pair of jeggings, based on a pattern from Ottobre Women’s magazine released in Autumn 2014 (05-2014-13 Lampi jeggings). Again, I made a yoga waistband. I made real pockets, rather than mock ones but other than that, followed the sparse, but clear, instructions. 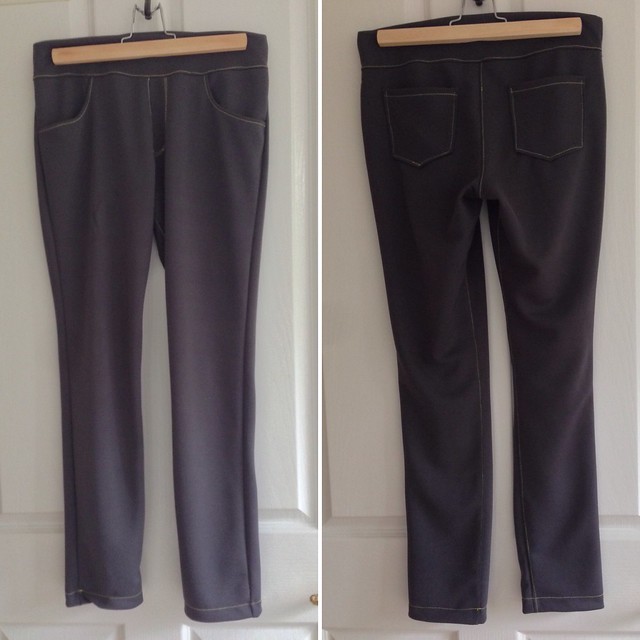 The left is more true to colour.  Clearly, grey is also hard to photograph.

I really like Ottobre! This is my first made up garment from the magazines I own (3: Autumn 2014; Spring 2015 & Autumn 2015). I have now stopped my subscription, although I will get one more to complete the subscription when Spring 2016 is released.  I had hoped that because we are upside down from Finland, that I would have 6 months to make up the patterns that took my fancy from a given magazine.  Alas, not so, and therefore I won’t keep subscribing. There are plenty of patterns in my current collection to keep me going.  But I might get a subscription again when I am back at work and have a regular income.  I highly suspect I will add the children’s patterns to my future subscription, because I borrowed a bunch from the Fabulous Funkbunny Herself and they are so very wonderful.

What do I like about Ottobre? I like the aesthetic (simple, kinda classic, a little bit daggy … Not as ‘fashion forward’ as Burda!) and that there are a lot of great knit patterns and activewear patterns.  I think I originally decided to try a subscription for the fleece jacket pattern (05-2014-15), but I have not yet found a good source of suitable fleece (preferably Polartec) in Australia. I will need to, soon, however, as my current fleece jacket is, literally, falling apart! I want to sew, rather than buy, its replacement!